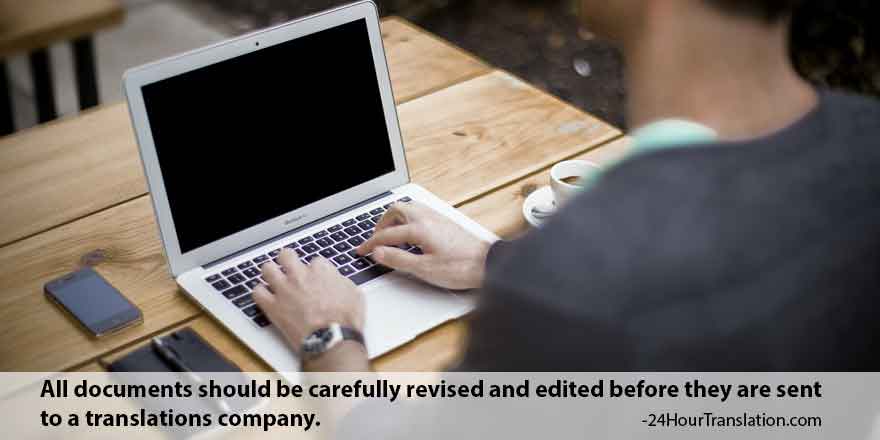 When writing documents to be translated from English to another language, remember that all writers make mistakes and have weaknesses.  Consequently, all documents should be carefully revised and edited before they are sent to a translations company.  Taking time to analyze the document to eliminate confusing sentences, poor sentence structure, wordiness, incorrect terminology, dangling modifiers, bad word order and other mistakes that can confuse readers will ensure that your translations will be free of errors.

Even if you aren’t the author of the documents to be translated, it’s a good idea to review them to eliminate common errors before having them translated.  Some common problems that should be identified and corrected include using incorrect terminology, spelling words incorrectly, using too many words and common grammatical mistakes like lack of agreement between subjects and verbs and between pronouns and their antecedents.  Before assigning the project to a translator, review the work to ensure that they make sense and have no errors.  If something doesn’t seem right, take time to ask questions and clarify vague and ambiguous concepts and ideas.  To avoid misunderstanding, replace them with concrete examples or illustrations.  Doing so will prevent the translator from making incorrect guesses that could amplify and perpetuate the problem.

Revising a document is the process of analyzing it for major errors.  Revising is needed when there are significant problems with the central idea, supporting information, facts and figures, organization, and logic.  Revising also involves correcting language and usage problems that make writing confusing due to poor sentence structure, grammar, and usage.  As you review a document prior to sending it to a translator, look for language that is confusing and identify the underlying problems.  Sometimes this will involve contacting the original author for clarification.  At other times, revising will require reorganizing and rewriting to focus on what the reader needs instead of what you want to say.

The goal is to identify and correct problems with unclear expressions, eliminate irrelevant details and words and add concrete ideas and graphics so that the document is easy to understand on a first reading and makes a compelling argument.