Companies that engage in global business must be flexible enough to work in diverse settings and cultures. Many times, workers underestimate the challenges of establishing a good reputation abroad, where language, culture and behavioral expectations may be unfamiliar. At a minimum, persons assigned overseas should be acclimated to the customs and conduct expected in formal situations. Training should center on acceptable behavior, greeting formalities, courtesies and acts of respect and acceptable norms. 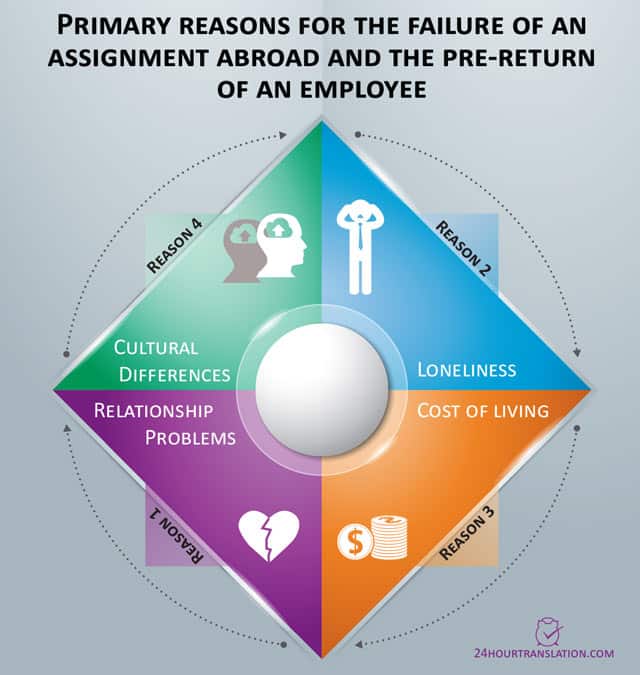 The primary reasons for the failure of an assignment abroad and the pre-return of an expatriate include cultural differences, loneliness, high cost of living and relationship problems.

Employees with extended overseas assignments usually experience a difficult initiation period of adapting to the foreign culture enough to feel comfortable and function effectively. When employees are inadequately prepared beforehand, their assignments often terminate early because of failure caused by inability to acclimate. Some common sources of failure to acclimate include lack of knowledge to interpret common body gestures, facial expressions, and other non-verbal motions that signal how to behave in certain situations. When a person is unable to interpret basic non-verbal cues, culture shock leading to ineffective communication between both the communicator and the recipients of a message may result.

Improving the Success of Overseas Assignments

In an effort to improve the likelihood for success of an overseas assignment, a growing number of corporations are investing in cross-cultural training programs for employees being sent on overseas missions. These programs often focus on teaching strategies and skills that help employees transfer, translate and settle into foreign cultures. Information covered in these training programs include cultural facts, skills in negotiating, language translation skills, tactics for managing and motivating employees, decision-making differences among cultures, and differences in views towards time and task management.

The best training also covers an employee’s own culture and how other cultures may have preconceived notions regarding it. For instance, in North America, our comfort zone is usually about the distance of a handshake. In Asian countries, the comfort zone might be a much large distance and in Middle Eastern countries, it could be much closer. Furthermore, in the United States, maintaining eye contact can be viewed as a sign of honesty, courage or confidence. If a person avoids eye contact, he may be viewed as being evasive, sly or dishonest. However, in parts of Asia, too much eye contact can be viewed as antagonistic or aggressive. In most cultures, discontinuous eye contact is the preferred norm. While a smile is generally viewed positively throughout cultures, it too can have some negative connotations, depending on when someone smiles. For example, Americans often are identified simply by their smiles.

Although an overseas assignment can fail for many reasons, a critical component to success is preparing employees for cultural differences. Just as the failure of companies to integrate cultural differences into product designs and marketing strategies is a sure recipe for catastrophe, a failed overseas assignment due to poor employee cultural training can be devastating and, at a minimum, very costly for a business.