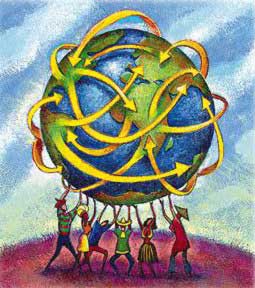 As the capitalist ideology has taken hold of the entire world, the pattern of economic activity and other investments is more or less the same everywhere. It is impossible for a country to limit its economic activities to its own land because there is an unequal distribution of the natural resources all over our earth. The area of land a country has, is often not large enough to cater the needs of all of its population. Developed countries take great pains to build the industrial zone at a distance from the densely populated areas. With the increasing awareness about environmental issues, not all the resources can be brazenly depleted in one place as the environmentalists claim that it will pose a great threat to our ecological system. The agglomeration of all economic activity requires unlimited labor, infrastructure and capital which is far from possible. Therefore countries need to engage in foreign investments and  which would be beneficial for all the partners and hence a demand for translators and translation service companies.

When the cost for manufacturing products rises in a certain region, investors try to manufacture in other regions where the manufacturing cost would be relatively low. High wages and better opportunities always attract foreign migrants to developed countries. Though the developing countries complain of a “brain drain”, this migration is due to the economic degradation of underdeveloped countries, rising unemployment and political instability etc. Studies reveal that  human happiness is directly in relation to the income of an individual. The studies showed that at a given point in time, the people receiving higher wages were happier than people with lower incomes in the same country. All this explains the process of human migration from one country to another. Now we will see the role of the French, Spanish, Portuguese. Chinese and German translators in the process of migration. Language discrepancy is the very first problem a migrant encounters when he plans to leave his native land and moves to a foreign country. The complicated visa procedures require a prospective migrant to get all his educational documents, birth certificate, marriage certificate, police certificate etc translated into Russian, for example, if he is migrating to an English speaking country. But this is only the beginning.

When he eventually migrates to another country, he often requires the aid of translators because of his documentation being in his mother tongue. Migration is just a natural outcome of the international economic integration we are experiencing. The incentive of getting a higher income and more opportunities has been drawing more and more immigrants to the developed countries. The travel costs have declined with means of travel getting faster and more reliable. Unauthorized immigration has also become common. Illegal immigrants have become a challenge for the developed nations to deal with. We have a great number of Mexican immigrants in United States who come there without any formal permission to live and work there. Such a flow of illegal/ unauthorized immigrants always creates many problems for the destination country. There are many Asian and African immigrants in Sweden who are facing problems in finding suitable residence. So not only the destination country faces a challenge when the foreign settlers come, the immigrants also go through a hard time. The language barrier is another factor which cannot be over-ruled. Those interested in migrating to another country need to be fully aware of the challenges that they would face ahead. They also need to hire the services of reputable translation services companies which will assist them with their paperwork and will translate their documents as per the instructions and demands of the concerned embassy.