Some facts and statistics

The Republic of Chad is a landlocked country located in Central Africa. It shares its borders with Libya, Sudan, Central African Republic, Cameroon, Nigeria and Niger.

The largest city and the capital of Chad is N’Djamena. The official languages of Chad are French and Arabic.

According to the 2009 estimate, Chad exports about 115,000 billion barrels of oil per day. According to the International Monetary Fund’s 2011 World Economic Outlook, Chad earned around $3 billion from its oil exports in 2010.

Griffith’s Energy International, a Canada based company, is investing in the oil sector of Chad. Many American companies are also investing in various sectors of Chad, offering employment to the local population but on low salary rates. The country’s infrastructure is being built with the help of these international organizations. 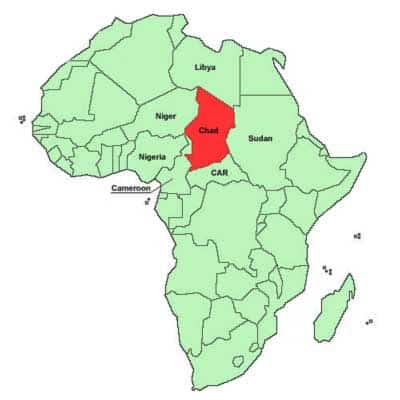 In the political system of Chad, President holds most of the powers. He appoints the prime minister and his cabinet and has a considerable say in other important appointments  such as top army officials, judges, provincial offices and heads of state-run firms. The President is elected for a five year term but at times when the need arises, he could get a two year extension as well.

The culture of Chad is predominantly conservative because still the males have more rights than the females and there are many occupations which are only adopted by the males.  People in towns and most of the families in urban areas as well, live in joint families. Because different ethnic groups and people belonging to different religious backgrounds are living in the same country, etiquette often varies. But there is a common note of respect for the elders in a family, the Chadians believe and practice moderation in every aspect of life. Chadians like to avoid confrontation but after the civil war a change has been seen in this arena. The younger generation often displays a show of aggression in their behavior.